NEW DELHI: A group of masked men armed with lathis and iron bars razed the facility of Jawaharlal Nehru University (JNU) on Sunday night beating students and faculty alike. The violence resulted in the hospitalization of more than 30 people, who were discharged on Monday. Violence allegedly perpetrated by outsiders on campus against students and teachers has raised questions about campus safety, the UNJ administration, as well as the alleged inaction of the Delhi police.

These are the main developments:

FIR against persons not identified by riots, damage to property


A day after violence broke out on the JNU campus, Delhi Police filed an FIR against unidentified people Monday over riots and property damage, officials said.

According to the FIR, students protested against a walk of hostel fees during the last days.

One case was recorded under sections 145 (join or continue in illegal assembly, knowing that it has been commanded to disperse), 147 (punishment for riots), 148 (riots, armed with a deadly weapon), 149 (any member of an illegal assembly guilty of crime committed 151 (knowing of joining or continuing in the assembly of five or more persons after it has been sent to disperse) of the Indian Penal Code (IPC) and section 3 of the Public Property Damage Prevention Act , said the FIR.

Jawaharlal Nehru University has extended the date for the biannual registration process until Sunday, as the servers have not yet been restored.

In a statement, Registrar Pramod Kumar said some “evildoers” had severely damaged the university’s information and communication services systems “as part of their ongoing upheaval.”

“This is to inform all students that the enrollment process will remain open until January 12 without any late fees for enrollment,” he said.

As fear took over The JNU, several female students left campus on Monday, heading back to their homes and/or relatives’ places a day after a mob stormed into college and got out of control.

Many girls leaving campus requested anonymity and said their parents were worried after the violence on campus on Sunday night.

However, there were exceptions, as many said they would stay.

DCW chief Swati Maliwal on Monday issued subpoenas to Delhi police and the UNJ registrar regarding UNJ violence. In the notification to the police, Maliwal has requested details of the FIR recorded in the case and reasons for not responding to the violence immediately.

It also sought details of all PCR calls made regarding UNJ violence from 2 p.m. on January 5 to January 6 and an action report on each call.

The Delhi Women’s Commission has also requested a detailed factual report of the entire incident along with the sequence of events, a copy of CCTV footage and reasons not to prevent a mob from entering the campus.

36 people treated at AIIMS after violence in UNHCR

Thirty-six people admitted to the AIIMS Trauma Center after the Violence at the JNU was discharged on Monday morning, hospital officials said.

Four of the 36 people, including JNU teachers and students, had minor head injuries, while others had suffered soft tissue injuries, abrasions, fractures and lacerations, among others.

They were taken to the Trauma Center between 5 p.m. on Sunday and 2 a.m. on Monday.

Violence in JNU was an organized attack: JNUU

A day after JNU students were attacked by a masked mob in the city, JNUSU President Aishe Ghosh, who was also wounded in the violence, on Monday claimed that it was an organized attack and some “teachers affiliated with the RSS” were promoting violence.

JNUSU Vice President Saket Moon said the student corps called the police for two hours, but did not get any help.

“It was an organized attack. They were singing to people and attacking. There is a clear security nexus JNU and vandals. They did not intervene to stop the violence,” Ghosh told reporters.

Delhi police said Monday that an investigative panel has been formed to investigate UNJ violence and the case is now with the Crime Branch. Addressing a press brief, Delhi PRO MS Randhawa police said the Crime Branch has found some vital clues and are working on it. She also reported that the joint CP Western range of the Delhi police, Shalini Singh, is the head of the fact-finding committee.

Police also said the internal security of the campus is from the UNJ administration. Disensing the charges of being late to the JNU, the police said, “We responded to the PCR calls, and the situation of law and order professionally.”

EU HRD Minister Ramesh Pokhriyal said educational institutions cannot be allowed to become a “political addition,” and promised “strong action” against the perpetrators of Sunday violence at night at the UNJ.

Pokhriyal said that educational institutions were intended only for education and should not be used for political purposes.

About 700 police officers deployed outside the gates of the UNJ

About 700 police were deployed outside the gates of the JNU on Monday, police said. Police said the grand rollout has been made to maintain law and order.

Violence erupted in JNU on Sunday night when masked men armed with sticks and rods attacked students and teachers and damaged the property on campus, leading the administration to call the police who conducted a flag march.

The Association of Professors at Jawaharlal Nehru University on Monday demanded the dismissal of Vice-Chancellor M Jagadesh Kumar after an attack on students and faculty members by a masked mob.

Addressing a press conference, JNU teachers also demanded an investigation into violence on Sunday. After what happened on campus on Sunday night, “the VC has to go,” JNUTA said.

Saugata Bhaduri, a teacher, said sucharita Sen, another teacher, was unable to reach the press conference as she “suffered serious head injuries.” The UNJ Teachers Association on Monday took a march from Sabarmati T-Point to the front door of the campus to protest the attack.

Efforts to normalize the situation in JNU: Head of prosorte

After a meeting of the UNI authorities with the secretary of the ministry of human resources development on Monday, the head of the university, Dhananjay Singh, said that efforts are being made to normalize the situation on campus.

“It is very unfortunate that there have been endless violent incidents in JNU in the last two days that worsened yesterday. We are very concerned and that’s why we had a meeting today with the MHRD secretary,” Singh said.

“As a member of the administration, I am very hurt by the injuries caused to students yesterday. We’re doing everything to restore peace on campus. I call on all members of the university campus to help us maintain calm and peace on campus,” he added.

“We call on students not to panic and leave campus. Steps are being taken to normalize the situation on campus and ensure the safety of all,” Dhananjay Singh said after meeting HRD officials over on-campus violence on Sunday. Speaking of his meeting with DDH officials, Singh said he had a very good HRD secretary meeting.


The Ministry of Human Resources Development met on Monday with officials from the UNJ administration andI take stock of the situation on campus after Sunday’s violence, even as Vice-Chancellor M Jagadesh Kumar skipped the meeting. The meeting was attended by the UNJ registrar, the instructor and other administrative officials who informed ministry officials about the sequence of events that took place on campus and the measures taken to restore normalcy.


Delhi’s Chief Minister Arvind Kejriwal held a meeting with state ministers at his residence on Monday.


The head of the Delhi Women’s Commission (DCW), Swati Maliwal, issued a warning to Delhi police on Monday regarding the violence in the UNJ the previous day. In the notice, Maliwal has requested details of the registered FIR in the case and reasons for not responding to the violence immediately.

Resign to the warden of Sabarmati Hostel


The chief warden of the Sabarmati Hostel at Jawaharlal Nehru University (JNU), R Meena has resigned from her post a day after the violence on the university premises. In his letter, Meena stated: “We tried, but we couldn’t provide security to the hostel.”

JNU submits report to the Centre


The jNU administration has sent a detailed report of on-campus violence to the conclusion of the sequence of events to the Ministry of Human Resources Development.


“I would like to call on all students to keep the peace. University supports all students to facilitate their search for academic activities. We will make sure that your registration in the winter semester is carried out without any obstacles,” said JNU VC M Jagadesh Kumar. He added that students don’t have to fear about their process. “The university’s top priority is to protect the academic interests of our students,” he said.

All UniIMS students decommissioned from AIIMS

According to reports from the news agency, Dr. Rajesh Malhotra, Head of the AIIMS Trauma Center, informed the media that the 34 JNU students, who were hospitalized for treatment On Sunday night, have been discharged. The president of the jNU student union, Aishe Ghosh, who suffered head injuries has also been discharged. Ghosh alleged that she was hit with stones and rods by members of the RSS-affiliated ABVP.

The Union’s interior minister, Amit Shah, spoke to Delhi Lieutenant Governor Anil Baijal and asked him to call representatives of Jawaharlal Nehru University (JNU) and hold talks. Following his meeting with the Minister of the Union, L-G Baijal met with the Secretary of UnJ and Pro-VC. 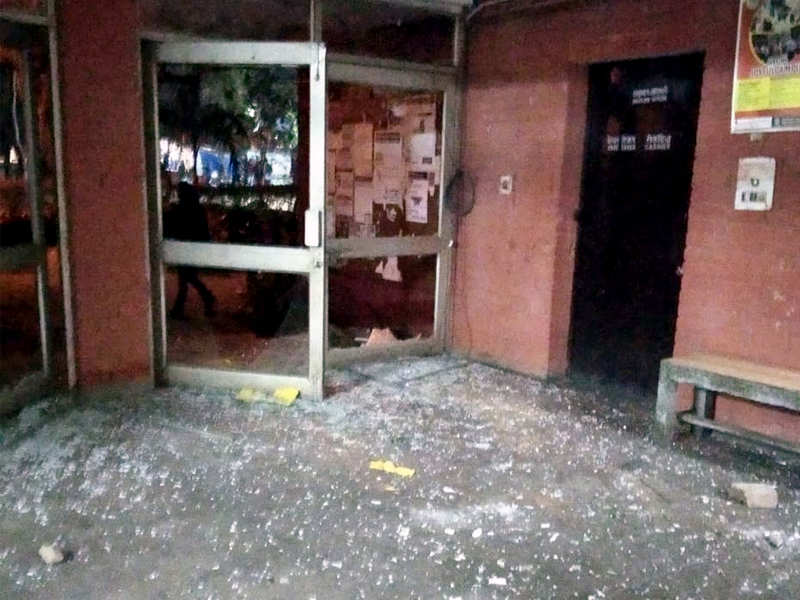 Delhi police on Monday transferred the violence-related case from Jawaharlal Nehru University (JNU) to its criminal branch, even as two senior officials of the main institute met with LG Anil Baijal to inform him about the situation prevailing there, officials said.

Case of JNU violence transferred to the Crime Branch

Delhi police on Monday transferred the violence-related case from Jawaharlal Nehru University (JNU) to their Crime Branch, even as two senior officials from the main institute met with LG Anil Baijal to inform him about the situation prevailing there, officials said.


A meeting was held at the residence of Delhi’s Chief Minister Arvind Kejriwal on Sunday’s violence at Jawaharlal Nehru University.


The massive deployment of security personnel remained in place today at Jawaharlal Nehru University, with authorities only allowing students with valid identification cards on campus who had witnessed the violence.