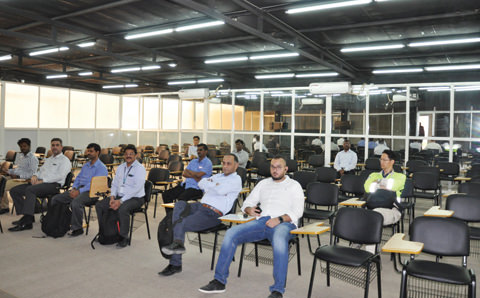 KUWAIT: Engineers sit in an exam hall at the Kuwait Engineers Society to take their tests for accreditation

KUWAIT: Sarah scrambles through her papers as she struggles to deal with a decision that has turned her life into a nightmare. She checks her documents one last time before heading to the Kuwait Society of Engineers (KSE) for the fourth time. “I have a Bachelors of Engineering in electrical and communications from Goa University, India, and after the new circular was issued, I submitted my documents in mid-April, which were approved in only three days,” said Sarah (not her real name).

The certification process takes only a few days, according to member of the board of directors of KSE Ali Mohseni, but these few days have turned into three months and Sarah has lost all hope of getting her residency renewed in time. Sarah’s case is one of many cases which Kuwait Times had spoken with, of engineers going through troubles processing their visa-related transactions due to the new degree accreditation regulations.

Since the Public Authority of Manpower (PAM) issued an administrative circular that stated that all expatriate engineers in Kuwait must be certified by the KSE in order to renew their residency, due to allegations of many fake and uncertified engineers present in Kuwait, many engineers expressed their frustration towards the process as well as the situation at the center.

At the time of the circular’s issuance, KSE had already confirmed with educational authorities worldwide the list of accreditation bodies in each respective country that are authorized to accredit engineering degrees from graduates there. In most cases, each country has a sole authorized accreditation body, but there are very few cases where there are more than one body recognized by the government to accredit degrees, such as India.

The engineers mostly affected by this new rule are engineers who graduated from India, says Dr Abdul Razzak Rumane, ex-officio chairman of the Institution of Engineers of India (IEI), Kuwait Chapter. “Unlike other countries, India has more than one accreditation body. Earlier, there was only one accreditation body in India – the All India Council for Technical Education (AICTE).

In 2006, when delegations from Kuwait visited India, they were given the impression that by the end of 2006/2007, all colleges in India would be accredited by the National Board of Accreditation (NBA), and hence the KSE board preferred engineers from NBA accredited colleges to be working in Kuwait. When NBA became independent in 2010, this created a huge confusion whether KSE has to follow NBA or AICTE, as there was now more than one body accrediting colleges,” he said.

The issue became more complicated when NBA sent a letter to KSE in 2013, stating that it is the only body authorized to accredit colleges in India. Until this year, engineers did not need to obtain KSE membership to work in Kuwait, unless they applied to work in government projects, but that changed when the new circular was released. “Since the circular came out abruptly and the rule was implemented immediately, people started panicking,” Rumane added. 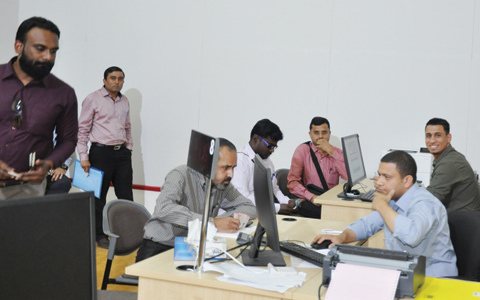 Engineers pay at the cashier to receive their non-objection certificates.

Taking an exam
Since Sarah’s degree is not accredited by NBA, KSE staff asked to review her file for approval, which once she got, she was informed that she became qualified to take an exam. An engineer in this case has three chances to pass the test, after which they would earn their non-objection certificate (NOC), a necessary document to process a visa renewal transaction.

Sarah was instructed to go to the cashier to find her file and pay the fees for the NOC. However, the cashier immediately informed her that he could not find her file. After waiting for two hours, a staff member approached Sarah and offered to help find her file, which he found in a pile of files kept on a desk just behind the cashier’s seat. Likely feeling humiliated, the visibly-upset cashier sent her to four different people, claiming one signature was missing from the file to be approved.

“I was finally sent to a man who found the signature that the cashier said was missing, but without any hesitation, he crossed it off, and told me to take an exam in order to get my file approved,” Sarah said. But a seemingly simple process was made much more complicated due to an apparent lack of communication on the KSE staff members’ part.

“The staff members at KSE said that they would contact me with the dates for the exam. After two days of waiting, there were no calls, so I went back to KSE and found out that I missed my exam, even though I was never contacted as promised. Since then, I have been to the place four times, and every time they promise they will contact me to inform me about the exam’s date, but nothing happens. My residency expires in mid-August – if things don’t get sorted out by then, I don’t know what will happen,” she said.

If an engineer fails to acquire an NOC, they won’t have the necessary documents to process their residency renewal, unless they are given a different job title under a non-technical field. This choice however, which represents the last resort for those who are desperate to renew their residencies in time, means that an employee cannot be hired as an engineer, thus losing all privileges associated with the job in the process, including the ever so valuable driving license.

“Driving license is very crucial for any field engineer,” said Peter (not his real name). “My file was rejected because my college isn’t NBA accredited.” Three months after his visa expired, Peter agreed to change his job title to have his visa renewed. But after changing his job title from an engineer to a system analyst, Peter says that his salary was decreased, and lost his driving license because he longer met the minimum salary criteria, or enjoyed the exception given to engineers.

There are many engineers who fear that they might run out of time and be unable to finalize their transactions before their already extended visas expire. John (not his real name) is racing with time to finish his residency renewal paperwork before his extended visa expires. “My seven-month pregnant wife has to leave the country at this odd time, simply because I cannot renew her visa while I am on an extended visa,” said Jack, an engineer who has his degree certified from a different accreditation body in India than the NBA. “Belonging to a non-NBA certified college has become a curse for me and my family.”

But according to Dr Rumane, this issue should not last for long. “With KSE’s recent visit to India, and after they release their report, things should become easier to deal with,” he reassured. “The process will become quicker, and the paperwork should finish before the visa extension expires.”

It has been four months since the manpower authority issued its new circular, but little has changed since. After a visit to India in June to better understand the education system there, the KSE board members will prepare a report of approval based on a comprehensive list of certified engineering colleges sent by India.

Fake engineers
The general belief is that the manpower authority issued its circular to fight the supposed spread of ‘fake engineers’ or people with fake degrees who are hired in highly-technical engineering jobs in Kuwait. Engineers in Kuwait are not against the idea in general, but their main issue is with how the process is executed. “My college is accredited by the National Assessment and Accreditation Council (NAAC) in India. If there were going to be problems with the accreditations, we should have been informed well in advance,” said Jack (not his real name).

Upon complaints from Kuwait-based engineers regarding issues with their courses or colleges, IEI Kuwait Chapter sent out messages asking them to report their problems, and gave them one week to do so. However, these messages could not possibly reach everyone among the thousands of engineers who graduated from India. “This message never reached me,” Jack said. “I had no clue regarding this until it was too late to report. I don’t know what’s going to happen after the report is out. I can only hope for things to get easy for me and not having to visit the center every second day.”

There are thousands of engineering colleges in India, and not all colleges have a national board of accreditation, said engineer Alwatheq Darwish, who graduated from Delhi College of Engineering of Delhi University in 1996. “Delhi University is a government college accredited by the government of India, but because it was established long before NBA, it isn’t NBA certified. I have been working as an engineer for 20 years. Just because my college isn’t accredited, does that not make me an engineer anymore? I am all for this new rule, but it should have been implemented gradually and in an organized and systematic way,” he said.

When approached, the Indian Embassy declined to comment on the matter, but has assured that they are continuously working to find a solution by cooperating with the Kuwaiti authorities “who have been very cooperative and understanding throughout the process.”

Meanwhile, KSE Chairman Faisal D Al-Atel confirmed that all international bodies were well informed in advance – in 2017 – regarding the circular. “We have visited several countries to understand their education system. In India, as NBA follows the same international standards of accreditation as followed everywhere else, we prefer expat engineers to have their accreditation from there. A report can be prepared only after we receive the said list. KSE, which has led the Federation of Arab Engineers (FAE) thrice and World Federation of Engineering Organization (WFEO) once, believes in doing what we have to for the betterment of our country. One cannot claim to be an engineer if they don’t have the required qualification simply on the basis on experience,” he said.

According to Atel, the new measures are necessary to help eliminate the existence of fake degrees in Kuwait and improve the quality of the profession in the market by removing unqualified personnel. “We are an NGO purely working towards making it easier for our fellow engineers by removing the rising trend of fake degrees and providing them with opportunities they deserve at different job levels. We are looking for the big picture here – the 2035 economic plan – where we have submitted three proposals which will create job vacancies for qualified engineers,” Atel added. “Let’s start with fixing this profession first, everything else will be calibrated.”

By Ramona Crasto and Ahmad Jabr