Home | Entertainment | Sanju: A Dishonest Biopic That Absolves Its Leading Man Of All Responsibility

Sanju: A Dishonest Biopic That Absolves Its Leading Man Of All Responsibility 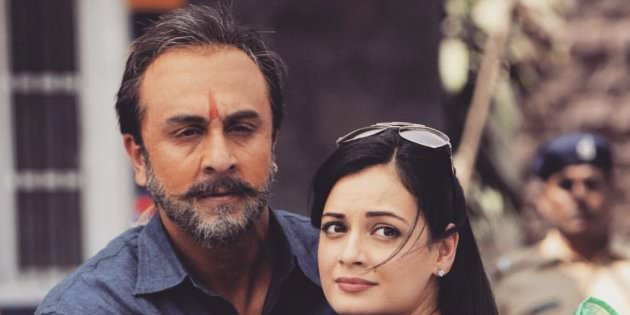 Rajkumar Hirani’s Sanju starring Ranbir Kapoor as Sanjay Dutt has shattered the previously-held record of Salman Khan’s Tiger Zinda Hai, and earned an astounding Rs 120 crore in its opening weekend. The film has also resurrected Ranbir Kapoor’s flailing box-office performance, bringing him back into the coveted 100-crore club that determines a star’s equity in Bollywood.

While the film is doing brisk business at the turnstiles, we need to acknowledge how deeply problematic it is. Hirani, master of emotional tearjerkers, uses his deft storytelling to weave a narrative that is excessively sympathetic towards Dutt, who happens to be his close friend and collaborator on the lucrative Munnabhai films.

Prior to Sanju ‘s release, producer Vidhu Vinod Chopra, Hirani and Kapoor assured the media that the film wasn’t an attempt to glorify or whitewash Dutt’s crimes. Yet, the film’s treatment and its companionable gaze paint Dutt as a victim and not the convict — that he was — under the Arms Act in the 1993 Mumbai blasts case.

The bias is established early in a scene where Dutt and his wife, Manyata (Dia Mirza), are on the lookout for a biographer to tell his side of the story. It is all downhill from there, as scene after scene makes clear that this is a Dutt-approved whitewash, rather than a clear-eye appraisal of one of Bollywood’s most enigmatic figures.

There’s not a scene that looks at Dutt’s life critically or with a sense of serious interrogation.

While Hirani could have put Dutt’s reckless actions in context, he chose to hold everyone — except for Sanjay Dutt — responsible for the star’s plight.

In the film, Dutt becomes a drug addict because he was a gullible young man, crushed under the celebrity of his famous father, and who was led into the world of narcotics by a scheming peddler (a very over-the-top Jim Sarbh). He turns into a compulsive womaniser but that aspect is dealt with in a comedic manner, that minimises the extent of damage it caused to the women he wronged. He hid the AK 56 rifles because he was ‘protecting’ his family and got caught at the ‘wrong time’ and the media blew up the case.

In fact, the media-bashing is the most troubling part of the film where Hirani makes Dutt appear as if he was ‘framed’ by the media. The makers constantly deflect blame to insulate their leading man and what helps the film in pushing this warped narrative is that the leading man is really, really good at his job, as is a stellar supporting cast with Paresh Rawal as Sunil Dutt and Vicky Kaushal as Sanju’s close friend. Kapoor immerses himself into the character and becomes Dutt, barring minor inconsistencies where his voice falters to sound more like Ranbir and less like the character.

At a time when newsrooms across the world are facing serious threats, and the establishment is determined to discredit the press, Hirani’s decision to paint the media as the villain — going as far as including a song where Kapoor and Dutt literally trash newspapers — is deeply irresponsible.

While the media may have misreported the trial, Dutt didn’t go to jail because of said reports. He went to jail because he hid powerful weapons sourced from Abu Salem, a terrorist convicted in the 1993 Mumbai Blasts case.

Hirani also chooses to exclude relationships that are too difficult to gloss over. His sisters, Priya and Namrata, are practically voiceless and his difficult relationship with daughter Trishala or his ex-wives isn’t even referenced to, as that wouldn’t easily fit into the blameless-hero-narrative.

Dutt (in)famously said that his daughter, Trishala, had dreams of becoming an actor and he wanted ‘to break her legs.’ None of those misogynistic, patriarchal remarks find mention in the film. The only time the film shows some self-awareness is when Dutt reads out a speech to his father where he says, ‘You deserved a better son.’

The unchecked privilege, the underlying victim syndrome, the consistent attempt to absolve Dutt of his actions, and then the media-blaming, make Sanju an ideal film for our post-truth times.

A biography is great when it stares at the truth with an unflinching eye, not with a jaddu ki jhappi.

After Sanju, let’s hope we don’t end up getting a Sallu.