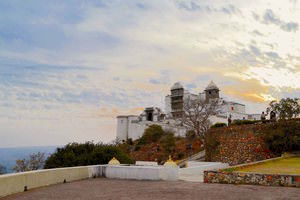 Udaipur is a city of romance, legend, and history. A favorite among visitors to Rajasthan, it is a jewel in a state known for fairytale palaces, imposing forts, and desert kingdoms. Among the many treasures of Udaipur, the Monsoon Palace has its own special charm, and is the best place to watch the sunset or the monsoon clouds over this magnificent city.

The original name of the Monsoon Palace is Sajjangarh Palace. It was named after Maharana Sajjan Singh who built it in 1884 on top a mountain in the Aravalli Hills. It was built as an astronomical center for tracking weather and the monsoon, hence the nickname. It was also intended to be a hunting lodge for the royal family.

Today, the palace itself is in a somewhat dilapidated state, the architecture and panoramic views of the valley, city, and shimmering Lake Pichola continue to attract visitors. During the monsoon season, it is a heavenly spot to watch the clouds scud by, the mist form on the lake, and the colors change on the many stunning palaces of Udaipur.

The Monsoon Palace is also famous as one of the locations in the 1983 James Bond film Octopussy. In the film, the palace is the residence of exiled Afghan prince Kamal Khan, the film’s villain. Other locations throughout Udaipur are also featured in the film, which plays every day at several hotels and restaurants in the city.

Udaipur was founded in 1557 by a Mewar king who ruled from Chittorgarh. On the advice of a Holy Sage, the king established a kingdom in the fertile valley protected by the Aravalli Hills. Less than 10 years later, Mughal Emperor Akbar attacked Chittorgarh and Udai Singh moved his kingdom to Udaipur for safety. Udaipur developed into a city and was the capital of Mewar until it became a princely state of British India in 1818. King George V said of the Udaipur, “In all Hindustan there is no picturesque city than that which Udai Singhji founded among the mountains.”

The Monsoon Palace is about two miles to the west of Udaipur and can be seen from many places in the city. It is illuminated in the evenings, turning into a glowing mirage of gold and orange. It is now under the control of the Forest Department of the Government of Rajasthan. The Sajjangarh Wildlife Sanctuary surrounds the property and is a reserve for reptiles, tigers, panthers, jackals, wild boar, nilgai, sambhar deer, and many species of birds.

Zomato expands its operations to 25 new cities in India