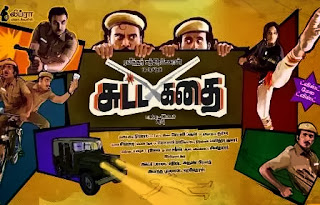 Chennai, Oct 29 (): Sutta Kadhai falls under the dark comedy genre which is the directorial debut for Subbu. The movie stars Balaji, Venkatesh and Lakshmi Priya in leads; Nasser plays a pivotal role in the movie.

The plot is plain as a day – two constables try to solve the murder case of a tribal chief. They both are being played in the process and end up in a trivial situation which makes to start all over again. The two constables are Ramki and Sangili played by Balaji and Venkatesh respectively.

But on the lighter side, the movie elicits natural laughter by highlighting clichés which has come out very well in this fiction but with a glitch, which is they all seem to stay aloof and not connected. The tea shop in the town has the signboard which reads two versions – Paradise (in English) and Paradesi (in Tamil dialect which means beggar). This could go on like an alcoholic slamming the door while a serious discussion is in progress between the lead roles.

Living up to the title ‘sutta kadhai’ which translates to ‘copied tale’ begins with MS Baskar running along a riverside with a bird-cap which symptoms the opening from ‘The lone ranger’ – if only Johnny Depp had seen this!

The most happy part of the movie is it ends in an hour and a half which saves you from getting mad.

Having everything as fiction kills the thrill and taking things literally is too much to digest. Prior to interval the sign board reads “Next comes twist” but after you refresh and get back to your seats you realize there is no twist in actual but a person named ‘Oliver Twist’ comes on-screen!

Sutta Kadhai ~ tanned too much !