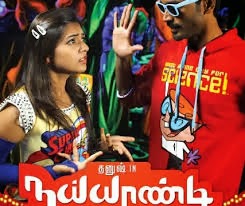 Naiyaandi, a flick of rom-com genre hit screens on 11 Oct and by the teasers released promised to be a box office hit following Raja Rani, unfortunately that’s not the case. The movie stars Dhanush & Nazriya in leads and is directed by Sarkunam.

Chinavandu (Dhanush) son of a retail owner falls for Vanaroja (Nazriya) a dentist. Chinavandu gives all his best shot to woo her but it just doesn’t click and end up back-firing every time. Finally the protagonist succeeds which is supposed to be a mundane task for the principle character. 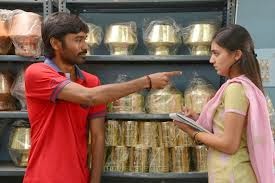 All this happens by the first hour and audience are already restless. Now Vanaroja’s father fixes her marriage with the antagonist. Thus the duo run away and get back to Kumbakona, where Chinavandu’s family resides. He has two elder brothers aged 40 and still unmarried, with no option Chinavandu spins false tales and send her in as a household employer to his very own home.

The movie takes the predictable twists and turns when Chinavandu’s two brothers try to woo her too. Well, like you might already know our protagonist finds out a way to handle the villain, his brothers, convinces his family – all while movie culminates. Now that this being told, save yourself some trouble by opting out from watching this movie. 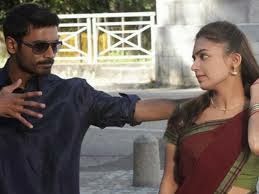 It’s like waiting for the last leap to cross through so you can start back home, but the movie just doesn’t end! Too many characters come in, disappear soon and later resurface from nowhere and probably unknown reasons too. The flick is ridiculously commercial and adulterated.

Nazriya accused director Sarkunam of utilizing double for intimate scenes which she refused to do herself. However its uncertain if this a fact or another publicity stunt to promote the movie.