Chennai, Aug 6 (): Irandam Ulagam is already setting out records with its trailer which has gone viral since it was put up on YouTube. It has reached close to 266,000 views since it was posted on August 4. The movie is directed by Selvaraghavan, camera helmed by Ramji and music scored by Harris Jayaraj. The fantasy movie has Arya and Anushka playing the leads.

The trailer was released along with its audio on Sunday August 4 at Sathyam Cinemas; the movie is expected to be screened in September.

Trailer at a glance

The trailer opens up pompously with a title “A Selvaraghavan Film” and also has captive phrases which tries to convey the story in brief. The trailer is full of Arya, Anushka and an unknown exotic planet which has several planets very much close to it that they are visible for naked eye. 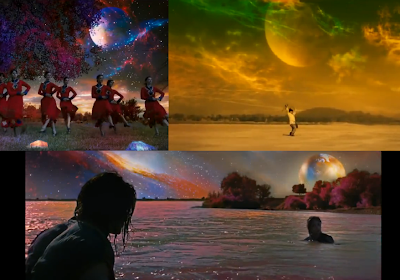 The trailer portrays Arya and Anushka in two different roles. One as a commonaire busy with mundane life while the other as a part of tribe in Irandam Ulagam (Second World) fighting, struggling for something. Probably a cause which we will have to wait to find out.

With the caption “How far will you travel for love?” the trailer sheds light on the duo where their love story is spanned across worlds. And did I mention that they fight not only men wearing hoods (the same one you see Lord Voldemort wearing in Harry Potter), but also dragons of some sort which are thrice as big as humans. It looks as though it’s a lion, however it’s got a pair of wings. Oops, how did this go amiss – it’s not just Arya fighting the evil, Anushka too. Watch the trailer yourselves, she’s got quite some moves on YouTube.

From the makers of Ayirathil Oruvan

It has semblance to few visual graphics from Ayirathil Oruvan. Also it kind of reminds you of James Cameroon’s Avatar – the blue people. Actor Dhanush has crooned for a song and showered praises for his brother, he tweeted “Wow just saw irandaam ulagam trailer.proud of u my bro.the extent u go 2 achieve wat u believe in s an inspiration”.

With the trailer on fire, it’s already in the limelight. The viewers just will have to wait for the movie to be released which is yet to be announced by the crew.