There is none who’d have missed the cult movie Thillu Mullu from early 80′s. It goes the same way except for removal of few characters which were replaced by a few more, probably something which Badri should have avoided. 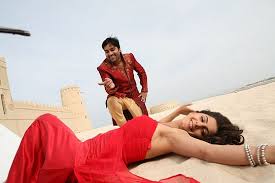 Pasupathy (Shiva), a misfit joins Prakash Raj’s company after luring him with a load of lies. One day Pasupathy makes his friend call his boss and pass on false information that his sister has fallen ill and he had to get back from office to attend to her and they can go enjoy IPL match while the boss thinks he’s back in hospital.

But, the friend messes up calling and saying that his mother is ill, the boss accidentally finds him in IPL match and after party. Now Pasupathy contemplates his boss that it was his twin brother Ganguly Kandhan. One lie leads to another and the whole thing gets clumsy. After a while, adding burden to it Ganguly Kandhan falls in love with his boss’s sister but the boss despises him. How it ends is what remains of the plot which really isn’t much of a surprise. 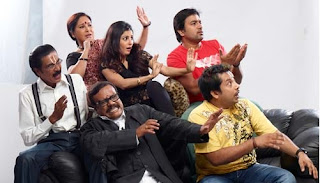 The only 20 minutes you enjoy thoroughly is when Santhanam comes on-screen as a relief when you are irritated with the silly one-liners for which they expect you to laugh.

The innocence in the humour content from the cult goes amiss here. Not really all the funny benders work out, instead they just get the viewers temperamental when Shiva pulls some absurd jokes or one liners.

The original version Gol Maal has been remade in two different languages – Aasegobba Meesegobba(Kannada) in the year 1990, Simhavalan Menon (Malayalam) in the year 1995.

Can Vijayakanth spoil the chances of Kanimozhi?