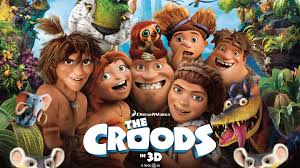 Chennai,Apr 21 (): The Croods, direct from Dreamworks Animations  could be the best animated movie of the year (so far). Starring Nicholas Cage, Ryan Reynolds and Emma Stone, the movie is directed by Kirk DeMicco.

Croods – the last of the survivors

The croods family are the only survivors in that cavemen age; the rest were either destroyed by mother nature or gulped by famished man-eaters. It was no surprise the croods managed to stay alive this long and the credit goes to the family head Grug and his secret to NOT dying is being afraid or anything, even be it minuscule. 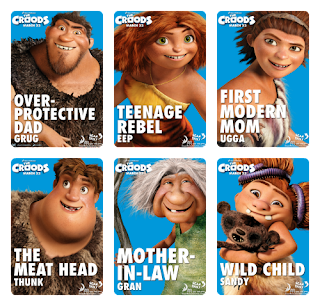 But Grug’s daughter Eep is a contrary character curious to explore the world. It’s her curiousness that leads her to another trespassing survivor ‘Guy’. Now Guy seems to know what he’s doing and he sense that the world is coming to an end, the earthquakes have now been rapid and the journey towards hope of tomorrow sounds like the only option.

The croods, all but Eep who’ve never been able to cope up a minuscule change are forced by mother nature to move alongside Guy. In other words, they hold captive of him and get him to navigate until they find a safe new home somewhere in the far mountains.

By the time The Croods reach the destination, Guy has made an impact on all but Grug as to live life and not to run and hide behind the caves. The Croods begin to realize what they’ve been hiding from all along and now they come forward to adapt, but will Grug be able to accept the inevitable? Will the croods make it from the destruction?  Well, find out from cinemas near you.

Grug: Fear keeps us alive, do not be afraid to fear

Eep: That’s not living, that was NOT DYING! There is a difference

Though Gurg seems to be annoying with his stupidities at the end of the day, he is the one who touches us with his responsibility and trying desperately to do the right thing for his family. While you walk out of cinemas you are content to have lived in a fantasy for quite a while.

PS. The way they take snapshots- hilarious and a must watch.

Sulk not to find faults, just enjoy the movie for it is, you’d enjoy the ride.

The Croods – A fantasy watching worthwhile