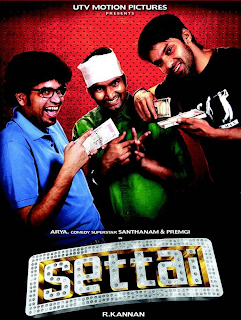 Chennai, Apr 6 (): Settai, the official remake of the Bollywood blockbuster – Delhi Belly, hit the screens yesterday with a warm welcome by Tamil audience. The movie stars Arya, Premji, Santhanam, Anjali  and Hansika Motwani and is directed by R. Kannan.

The lives of three bachelors sharing a room – Jayakanthan(JK), Nagaraj (alias) nadu pakkka nakki and cheenu (Aarya, Santhanam and Premji) become a mayhem when a parcel is accidentally misplaced. JK’s girlfriend does a favour for her air hostess friend, she collects a package from Richard-the smuggler. Instead of dropping it off in the expected place, she hands it over to JK, who forwards it to Nakki and he turns it over to Cheenu, but along with another package similar looking – stool sample and asks him to hand it over in hospital nearby.

As expected, the package interchanges and the protagonist is on run, chasing these three and the rest of the plot is fun-mixed running and chasing.

The first half is much convincing than the other, the theatre is filled with heavy laughter throughout. Just by the looks of Premji and Santhanam on-screen, the theatre fills with laughter.

Thaman has scored his music well and aesthetic. 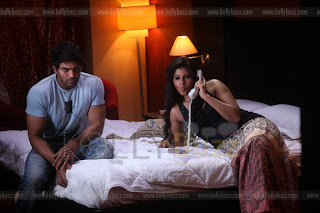 If you have seen the Bollywod version, maybe you should limit yourself with that. Taking an extra mile to watch the Tamil version isn’t going to be good-comparatively. Otherwise you’d enjoy the show. They make us believe that the events are happening in Mumbai, but hardly any place in Mumbai is shown on-screen. One for instance, the package Cheenu has to drop is “Saroja saman kadai” which was out and out in Tamil writing and there were no translations in the name board.

Songs do not fit in, they do not sync with the plot and seem more like speed breakers.

Before fixing on the title, Settai (prank), the team picked up two other names – Varutha padadha vaalibar sangam & Vai Raja Vai. And after the villain – Vijay Raaz from Hindi version declined to reprise his role, it was bagged by Nasser.