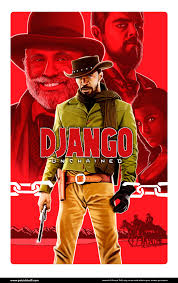 Django Unchained, a movie which portrays the events dating back to pre-American civil war where a black slave has to face all the odds to get the freedom for the love of his life. Starring Jamie Foxx, Christopher Waltz, Leonardo DiCaprio and Kerry Washington, the film is directed by Quentin Tarantino.

The movie begins with Django and other slaves chained and dragged by their lawful owners in a dark night when Dr King Shultz (Christopher) interrupts and offers to purchase Django after a rubble. Dr Shultz being a honourable gentleman reveals his intentions that he is a bounty hunter and is in search of someone Django knows well and in turn he offers his freedom and that’s how he is credited with the name, Freeman Django.

When they succeed in their mission, Dr. Shultz offers him a share in his bounty and in time Django reveals his plans to retrieve his wife Broomhilda Von Shaft. Dr Shultz helps track her back to the capital of slave town Mississippi. He finds out that she has been held captive by Calvin Candie; he also offers to help him get her back considering the fact he has heard about Mr. Candie’s plantation. 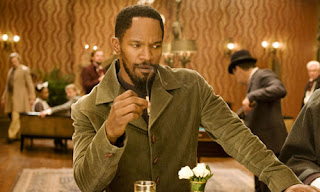 Dr Shultz devises a plan of buying out one of Candie’s best Mandigo fighters from the plantation for a ridiculous rate which would grab his attention and alongside the purchase he can buy a slave (Hilda) in some combo sale. But when they get all their plans go futile with Stephen, Candie’s head house slave, interrupts and finds out their intention after he confirms his suspicion that Hilda and Django know each other previously.

Stephen notifies Mr. Candie and with raging pride he points a gun at Hilda’s head, promising to put a bullet through it if they resist to pay that ridiculous amount for the girl instead of Mandigo fighter. After paying off $12,000 despite things going on smooth with an ego clash, Dr Shultz puts a bullet through Mr Candies’ chest and he dies instantly, which invokes an arms fight between Django and Candie’s henchmen. The rest of the flick shows how Django avenges his friends’ death and gets back the love of his life.

Dr Shlutz: I would pay top dollar for the Right Nigger.

Mr. Candie: Gentlemen… You had my curiosity. Now you have my attention.

The cowboy effect – be it astounding stunts or aesthetic background score – it just takes you back to Clint Eastwood’s ‘The Good, The Bad, The Ugly’ days.

There seems to be no notion of the Civil War, as this movie plays just a year back American Civil War. One other glitch which does not make sense is when Stephen sniffs the relationship between Django and Brromhilda.