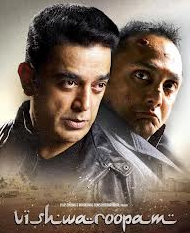 Chennai, Feb 8 (): Vishwaroopam, the much-awaited and much controversial film was finally screened herein Tamil Nadu on 7th of February. Written, directed and produced by Kamal Hassan has indeed put up a remarkable fight in the movie and for the movie as well. Debutant Pooja plays a naïve blond role which suits her aptly. Andrea, Nassar and the rest are mere add-on flavours  Kamal steals the show with his awe-striking performance be it stunt or light romance with Pooja at unexpected situations.

Viswanath alias Viz and his young wife Nirupama are a couple residing in New York. Viz is a Kathak teacher while Nirupama is a nuclear oncologist. Little do we know they will get into trouble by Nirupama’s mere guilt of having planning to have an affair with her boss Deepak (Samrat). 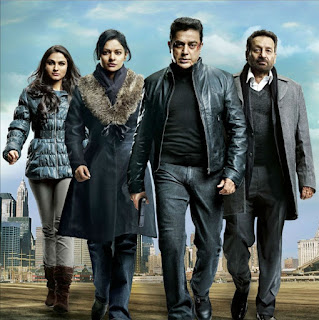 She hires a private detective to find out more about her secretive husband whom she married only to get into a safe zone to pursue her Ph.D. in United States. As the investigator digs out some info, he gets into the hands of Jihad accidentally and ends up murdered. She gets to know more than what she had intended to know, first he wasn’t a Hindu but a Muslim, next he’s not a Kathak teacher but an imminent killer.

Jihad unaware that she had sent the investigator to spy on her husband digs out more information and finds out that she works for Deepak who in the first hand is a part of Jihad organization as well. Doubting his loyalty Jihad group led by Al-Quaeda Jihadi Omar (Rahul Bose) and his accomplice Salim bring in Viz and Nirupama only to accidentally find out Viz isn’t really what he looks like but someone terrifying even for a Jihadi.

By the time Omar reaches the hideout where Viz is held captive, Viz and his wife escape them killing the group of henchmen by his reflexive skill-set and awe-striking stunts. Then Omar subtly mentions something which is way terrifying what it looks like, he says something like “Am not surprised he escaped, indeed it was him who trained us Al-Qeada Jihadis”. The rest would be good to watch than to read, so we suggest you walk into cinemas and we assure you’d walk out satisfied. 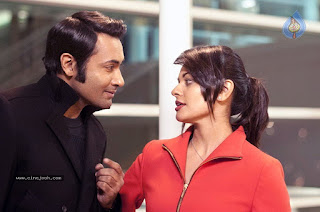 Pooja – she plays the role of a blonde (minus) the blonde hair. Looks like Kamal’s pair always look dumb or are dumb, either way it works out well in every movie including Vishwaroopam.

Kamal Hassan keeps you spellbound with his performance – be it the action sequence or the convincing plot or the deceiving acts he does or the humour-mixed romance sequence with Pooja at unexpected situations, he’s simply splendid.

Kamal: Oru pommanatiye edhuku kai neeti adikurel?
<<Why the hell slap a harmless women!>>
The bad guys kicks on his balls and : ipadi adicha valikuma solu? <<Will it hurt if I do this to her? Hence the slap>>
Kamal (gobbling): ok !?!?!?!

Pooja: Kadavul dhan kapathanum <>
Kamal: Endha kadavul? <Implying Allah or Jesus or any other from n number of gods>> 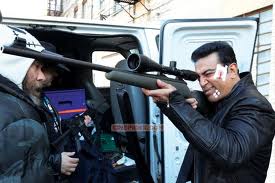 Okay, Kamal and his acting wife are caught, why should rest of the team – her father and Andrea volunteer getting into trouble!

Once they get to know who Kamal and team are, why then is she sticking around!
Andrea, Nasser and other notable artists weren’t utilized efficiently, or maybe their potentials went futile in editing over the controversy.

Kamal renowned for exploring technicality options in his work, with his Vishwaroopam he boasts of his work being the first Indian film to use Auro 3D Sound technology and second in world after Red Tails(2012).

Kamal’s daughter Akshara has boarded along in this crew as assistant director.