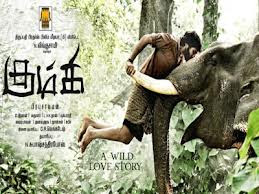 Kumki is a movie that deals with the bonding between a mahout and his tamed elephant. It is directed by Prabhu Solomon of the Mynaa fame starring Vikram Prabhu, son of veteran actor Prabhu and grandson of late actor Sivaji Ganesan. The debutant has done his homework which is clearly showcased on-screen.

It all starts in Aadhi Kaadu where the tribe resides all alone unwilling to move away from their ancestral place and the wild elephant Komban walks in and destroys their farm and houses as it passes by. The village heads decide to bring in Kumki (an elephant trained to tame wild elephants) as the harvest begins.

But the Kumki’s trainer couldn’t make it on time as he’s got personal family problems to take care of. Boman (Vikram Prabhu) convinces his friend that he’d stay along with his pet elephant in place of Kumki until the original Kumki along with his mahout arrives.

With no idea of what he’s going to face, Boman along with his maternal uncle-Kothali and helper boy-Undial reach Aadhi Kaadu. To make the situation even worse, he falls in love with Alli (Lakshmi Menon) the village head’s daughter. Love blinds his eye and makes him stay even longer than what was planned earlier. What happens next is a disaster which needs to be lived on-screens. 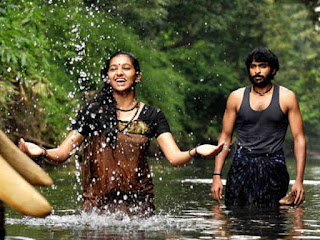 Astrologer: Adhuku mela palagidum…
<<You’ll get used to them after 52>>

If Mynaa was one kind of trendsetter then Kumki is the one taking it to the next level.

When you walk out of cinemas, Kumki makes you shed a tear and leaves a mark forever in your hearts.

An embodiment of epitome that animals showcase love like no one else.

Vikram Prabhu delivers adept screenplay and gives what is exactly asked for – no more, no less.

The scenic mountain, the falls and places around them are beautifully showcased by cinematographer Sukumar. 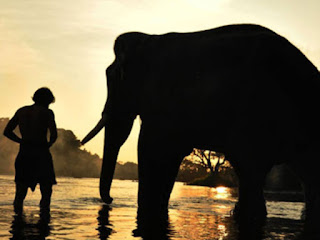 The wieghtage is not equally shared among the characters. Throughout the first part, Boman and his elephant Manikkam dominate the storyline and in the second part it’s Alli and elephant and the climax is unique again.

The visual effects in terms of graphics are not convincing.

Few might feel the climax unconvincing and director’s touch is quite predictable.

Earlier the film was titled Komban and later changed to Kumki.
Two acres of agriculture land were brought as the climax required the land to be destroyed by elephants.

Kumki – An epitome of love and life

Action by 2020 key to keep global warming below 2 degrees