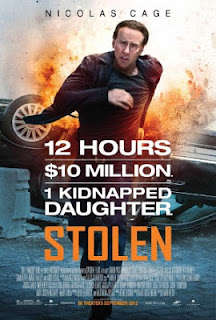 The plot goes like this-Will(Nicolas) and his team Vincent(Josh) &Riley(Malin) start out for their bank job. Though they get their dough without being caught, a clash within the team creeps at the last moment and Will shoots accidentally in Vincent’s leg. The team parts and the cops are tailing Will who’s on Will (who’s got the stolen cash) now. Obviously he is caught and is termed 8 years in prison.

The missing 8 years hasn’t been good on Vincent whose leg had to be amputated and a couple of years back, he was dead in a fire accident or that’s how his FBI records show. However he was very much alive changing his identity awaiting his share on the robbery – 10 Million dollars!  But, Will had to get away with it clean, so he had burned all the cash in a garage before the cops grounded him, so that his term would be reduced as he had no dough.

Vincent kidnaps Will’s teenage daughter Alison and claims his fair share in return for his daughter. Will tries to convince he burnt all the cash but with no option left, he buys 12 hours’ time and works on his options. First the cops-who turn him down for they too suspect he’s hidden the cash some place.  Second is to get back on job-Get back to the bank job, steal the gold bars, exchange it with Vincent for his daughter. But will this happen, the last time didn’t go well! Even if he managed to get away with it, will Vincent the psychopath keep up his word? Find out at cinemas near you… 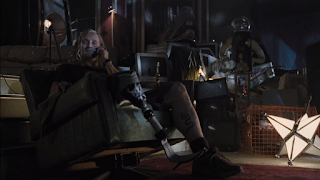 The bank’s jobs look brilliant even if they don’t make any sense.

The car chase sequences keeps the shrill and momentum.

The super cop Harlend gets to every place where robbery is planned and also on time. However he’s dumb to let them get away with it throughout.

Nicolas: Everybody’s tellin’ me you’re dead
Josh: Well, that depends on how you’re interpretation of the word “dead”
I’m clearly not “living”

Harlend (Referring Nicolas):  You’re a thief, a crook and a scum-bag, but you’re also a very clever tree frog. 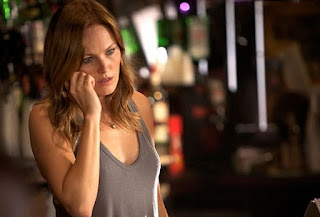 Where is the new part here? Everything is same as the other bank job movies with names varying.

Too predictable from all perspectives – cops, Nicolas and Josh too here in this case!

How do the cops know it as if they were the ones who planned the robbery? It remains a mystery.

Clive Owen and Jason Statham were planned for the lead roles but eventually it was passed on to Cage.

Stolen  ~ Getting back what’s rightfully yours! Or you think so!