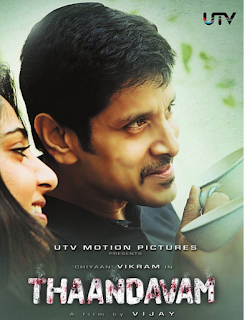 Sep 29 (): Thandavam has a simple storyline -a payback for injustice done to an honest cop. Vikram, well-known for shaping up physically in a short period has done his homework well, it can be judged from his looks in the movie. Anushka has supported him and the storyline well, but Amy seems to be just a showpiece to the movie.

The movie opens up with a bomb blast in London, January 1 2011. Then a year later, Kenny (Vikram), a blind orphan goes around killing specific set of people. While he’s busy killing, Sara Vinayagam (Amy Jackson) – a model comes around romancing him.

After a point, when it becomes mandatory to reveal the flashbacks, patrons find out something already known – he lost his family for being an honest RAW agent. He was framed when he comes to London in search of a confidential flowchart having military secrets – by his very own agency. After few predictable twists and turns the plot comes to a near ending with a challenge – Can a blind man do this all alone? Will he be able to salvage his better half’s murder? Will he be able to succeed in proving that he was innocent and framed by RAW? Do find out yourselves.., 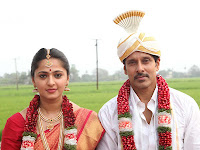 Director has beautifully captured how the newly weds are nervous around each other.
The scenes where Vikram tries desperately to impress Anushka have come up well on-screen.
Sandhanam has done a good job, if only had he been throughout it’d have been humorous all along.

The team has done its homework as not to miss out bits and pieces of  minor logistics on how a blind man can survive.

Sandhanam: I am Satyam.. Promise!

Vikram: Adhu thapache
<<No no, that’s not right!>> 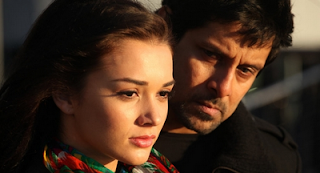 A big question – Where is the flowchart when the movie ends?

While the team has done its part of R&D when it comes to specific, minor logistics, big ones are left out hanging midway. At certain instances, the screenplay makes no sense!

The whole movie has been clustered from bits and pieces of prior movies – Gajini, Rendu, Kandasamy, Kho and the list goes on.

CG (Computer Graphics) sucks! Could have been better.

Thaandavam raised 20 lakhs for the National Association of Blind (NAB) through its premiere show donor passes.

Vikram underwent special sessions with Daniel Kish, an internationally-renowned expert of human echolocation for his role in this movie as a blind man.