Sep 17 (): This flick from Madurai origin seems to touch every Tamil soul with their witty rejoinders in its very own slang and style. Sasi Kumar as usual is portrayed a violent villager, but in addition he also plays the charming womanizer, but in a good way. The new look on Kollywood screens – Lakshmi Menon has done complete justice to her role.

Sundarapandian(Sasi Kumar) is the prince charming for women of all age group – be it a teenager or mothered women! He is a jovial guy from a good family background who has ethics and principle of his own. When he finds out his friend is trying to woo a girl – Archana(Lakshmi Menon)  while he’s commuting in bus enroute to college, he comes forward and lends a helping hand. But it happens that she falls for Sundarapandian instead of his friend!

After an hour-long humor sequences, everybody compromises and the girl’s former boy friends (well, actually the wannabe boy friends) waves green signal to Sundarapandian and Archana’s love. However, there is one comedian who turns out to be villain not by choice but by chance. An accident becomes an incident and the storyline takes a turtle turn – friends turn foes and the rest of the movie is about betrayal and it’s out coming barbarian acts! 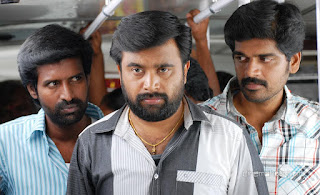 The screenplay is passable, casting is more than just good, in all a wholesome humor package.

Vijay: Naalu masama try pannuren, escape ayikite pora!
<<I’ve been trying for the past four months, but she just escapes every time>>
Soori: Aparm pinna, ninnu unna ottita pova!
<<What else did you think! She’d sit around, cajole and coax you!>> 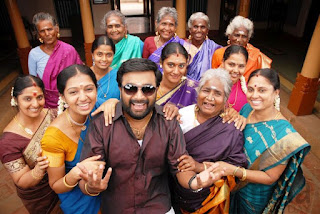 Why does Sasi Kumar choose the very same genre and why does he have to stand by friends all the time – is this a business tactic to mark his stand at box-office!

The first half flavors fun and frolic, in the second half it takes a turtle turn and the humor factor is missing, or at least it goes unnoticed due to the circumstances.

Even at promos of the movie, Sasi Kumar prefers talking in Tamil for he is a patriot of the Tamil soil!
Sasi Kumar plays the lover boy for the first time!