Resolutions on 18 May- International day of War Crimes

“NAAM” a movement dedicated to the progress of Tamils organised a meeting on 17.05.2010 at T.Nagar, Chennai to commemorate the genocide of 20,000 people on a single day on 17.05.2009 by the Srilankan army and Sinhala criminals.

Meetings were organised by many other movements throughout Tamil Nadu for the same purpose. People expect that United Nations and India should engage with Srilanka to punish the war criminals and rehabilitate the remaining people in the North and East of Srilanka. Such concerns were raised in this meeting too. 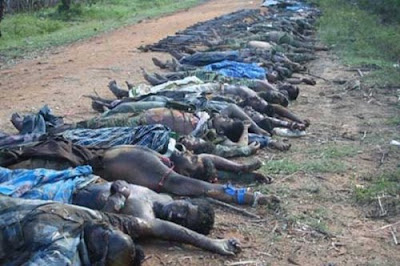 In a statement signed by Mr. Ravi, President and Mr. Sadasivem, General Secretary of NAAM, the following resolutions were released and circulated to press. NAAM have announced that they will follow up with these resolutions with appropriate authorities.

1) Last year during the height of the genocidal war in Lanka, close to 40,000 civilians were brutally killed by the Sinhalese army. We remember the victims of war crimes and simultaneously express condemnation to the Government of Lanka through this remembrance meeting. We also invite the world community to commemorate May 18 as World war crimes day, not only in memory of the victims of Eezham, but of entire human community.

2) The Genocidal war in Lanka saw the use of internationally banned weapons like cluster bombs and chemical bombs on innocent civilians. We call upon the Indian External Affairs establishment to extend all possible support to the western Governments in their quest to bring the perpetrators of war crimes to justice.

3) We request the Government of India and all other world Governments to exert maximum pressure on the Lankan establishment to start the process of dialogue for peace to take root permanently. The international community should pressurise Lanka to release all civilians who are kept behind the barbed wires in concentration camp style enclosures and provide them with proper rehabilitation in their traditional homelands.

4) We request Government of India to exert its positive influence on GOSL to secure the immediate release of 11,000 Tamil youths who have been confined in secret locations and to provide them with proper rehabilitation.

5) We request Government of India to impress upon the GOSL to nominate Eazhem Tamils also in the Committee that look into the reconciliation and rehabilitation activities of victims of war thereby ensuring proper and appropriate utilisation of funds.

6) We condemn the colonising measures of GOSL with Sinhala settlements in the traditional Tamil areas of North and Eastern provinces. NAAM requests Government of India to exert influence on GOSL to reduce the presence of Sinhalese army in the Tamil areas proportionate to the population and to gradually withdraw Sinhalese forces completely from Tamil homeland.

7) We request Government of India to positively consider VISA relaxations ( rather canceling VISA restrictions) for the visiting Lankan Tamils to pursue their educational, cultural, media and commercial needs.

8) We request Government of Tamil Nadu to favorably consider giving proper training in nursing and para medical studies to Tamil youths. These trained medical staff can be a great help to the medical rehabilitation of victims of war.

9) We also request Government of Tamil Nadu to favorably consider a special quota and or special fee waiver for Lankan Tamils and the Tamil students in the refugee camps.

(NAAM claims to be an organisation of people who strive with righteous feeling and love for the elevation of Tamil race . This is not a political party. A social movement for Tamils. Genuine democracy, Defending the land and water rights of Tamils, Social justice, Rightful opportunities to Tamils in the new economic growth, Development of Tamil Language, Emancipation of women, Eradication of poverty, Healthy media, Protecting agricultural economy, Quality education, good environment and supporting the suffering Ealem Tamils are the important concerns of NAAM. NAAM call everyone to act together.)

Jan Jananayagam - IIFA in Colombo is a disrespect to the fans