Father Jeghat Gaspar, the founder of Tamil Maiyam called for a new dialogue and for preparing a new road map to help the Tamil people of war affected Srilanka. He was addressing a meeting on 17.05.2010 organised by “NAAM” a social movement at Chennai on the occasion of first anniversary of Genocide in Srilanka. The following is the abstract translated version of his speech. 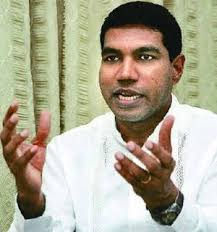 No one would seek unpopularity. In the Indian context, particularly among the English speaking community, taking a stand on the side of the suffering Tamil brothers of Srilanka does not reward one politically, socially or financially. Anyone speaking for the people is branded here as propagandist of LTTE. Acutely aware of the consequences I have decided to offer my voice to those voiceless victims of genocide perpetrated by the politico-military junta – the Rajapakse brothers. I pray that my country men, as true children of a great civilization will courageously raises their voice against the immoral, undermocratic foreign policy of India that has substantially contributed to the genocide of our Tamil brethren in srilanka. This nation belongs to a billion people, not just to some politicians and bureaucrats.

‘Our people in Srilanka have lost everything. But still we are just talking with ourselves. We allege our political parties. Whereas the fact is that we all have committed mistakes.

Tamils in Srilanka are now placed in existential emptiness. Therefore to help them we have to think differently. Tamils do not need heroes to help them. A small group is enough. We need a right approach and a sense of responsibility.

We have been comprehensively defeated in Srilanka. I accepted LTTE because of one reason that they tried to address the problems of Tamils. LTTE is not the root cause of this problem. It was only the Sinhala majoritarian racism. The society of Ealem Tamils has been a Saiva Tamil society (vegetarian). The tightness and adamancy of Sinhala racism created LTTE. At one stage the military prowess of LTTE was the bargaining strategy for Tamils. Therefore I accepted LTTE.

Ealem Tamils still have a right to start armed struggle again. Because, democracy have failed them. United Nations, Human rights organisations all have failed them. Now they do not have even food and shelter. What can we do for them?

Innocent people have suffered in this war. They were denied food and water. Infants and mothers were killed. If 40000 people can be killed in four months how can we forget it?

In India we practice a liberal democracy. But we have been a party to this crime. We have a responsibility to set it right. This ( Indian) Government is our Government. We can raise our voice against our Government ( If they go wrong)

2.Access has become a greatest impediment to Justice. 11,000 young people are imprisoned in Srilanka . We cannot hear or see them. No one is thinking about a minimum demand of bringing them under international laws for trial. How to create access to those young Tamils? How to get entry into the Rajapakshe’s colombo fort? How the world can create such access? That is a challenge.

3.One year has passed after the end of war. But Rehabilitation and Reconstruction works are not enough. It is a shame that 10 crore Tamils all over the world cannot help rehabilitate at least 1000 Tamil families in Srilanka. Instead we are accusing each other as traitors.

We cannot go to beg Colombo for this. We need to find a route for engaging the concerned for rehabilitation. Suppose there had been a ceasefire and LTTE had went for discussion with Colombo in the last phase of the recent war, would it be proper to call LTTE as traitors? If we have to defend our children we have to approach the enemy too. Can anyone say what happened to hundreds of crores of rupees granted by India for rehabilitation? We have to ask for joint mechanism for rehabilitation. If we do not think in such a realistic way we cannot save the rest of survivors.

4.The Ealem war has killed 37000 fighters and 1.5 lakh civilians. The people there wish they should be at least left alone now. Their political ambitions have been crushed.

During the cold war, the fighters for freedom could take any one side and get support. But in unipolar world, terrorism is addressed as a main political philosophy. Under such circumstance, Sinhalese have effectively used the democratic institutions. We have no minimum program to utilise democratic instruments. We have to approach even the people we don’t like. The political animals shall never reform. Cho Ramasamy and Suramanyam swamy do not constitute our world. There are people among us who do not know the background of the Ealem problem. We need a process of engaging even such ordinary people.

5.We have to understand the fact that the Indian foreign policy framed in 1980s remains unchanged for united Srilanka. But we can expect that one day Ealem may be awarded even without a demand.

Afgahanistan has become a playground of USA,Europian Union, Russia, Pakistan, China and India. This is an example that a country which allows competition among super powers in its soil shall ruin. Srlanka too cannot be happy for too long. They have recruited two lakh people in Army from their 100 lakh population. They will become a criminal force and kill themselves. After allowing China, Pakistan, India and giving scope for USA, EU, Sinhalese cannot live in peace.

History shall return for Tamils. Sinhalese cannot escape after committing so much of atrocities.

6. The necessity to achieve Ealem exists. The rights for land, language and federal political solutions cannot be achieved at one go. We have to work hard to achieve them. Let our anger is kept inside. At now we have to gather as a group exhibiting Virtues.”

——————————————————————————————–
Jegath Gaspar Raj is a Catholic priest currently residing in Chennai, India. His academic qualifications include bachelor degrees in History, Philosophy, Theology and Masters in Political Science, and Strategic Studies. He served as an international broadcast journalist for seven years, co-founded the Chennai Sangamam, played the pivotal role in the making of “Thiruvasagam in Symphonic Oratorio”; co-founded “Give Life” project, was the chief architect of “Give Life Marg Chennai Marathon”.

Fr. Jegath Gaspar Raj is a staunch democrat with fervent faith in the ideals of freedom, equity and fairness. He fiercely resists every form of fundamentalism and believes very much in dialogue between religions and cultures. Through international radio he reunited around 4600 SriLankan Tamil families who were disintegrated by the civil war between 1996-2000. This he considers the best he has done so far in his life.

No one would seek unpopularity. In the Indian context, particularly among the English speaking community, taking a stand on the side of the suffering Tamil brothers of Srilanka does not reward one politically, socially or financially. Anyone speaking for the people is branded here as propagandist of LTTE. Acutely aware of the consequences I have decided to offer my voice to those voiceless victims of genocide perpetrated by the politico-military junta – the Rajapakse brothers. I pray that my country men, as true children of a great civilization will courageously raise their voice against the immoral, undermocratic foreign policy of India that has substantially contributed to the genocide of our Tamil brethren in srilanka. This nation belongs to a billion people, not just to some politicians and bureaucrats.

Jan Jananayagam - IIFA in Colombo is a disrespect to the fans