TN CM Karunanidhi, Ajith, Rajini and the end of the world

It’s raining Narcissists in Tamil Nadu recently. I guess that is not news really, isn’t it? Recently Film industry supporters had a celebratory party to thank the Tamil Nadu CM for allocating 90 acres of common man’s land for the workers in the Film Industry. It is not a completely free gift, but a 99 year free lease. But I doubt if you would be able to vacate anyone out of their homes in India, after occupation for 99 years. 90 acres in Chennai does not come cheap! It must be a few thousand crores, unless I missed a digit. I must know because I shelled my life saving to buy a small plot several kilometers from the gifted land, because I could not afford a place in the city. If I had known that the TN CM was going to give away land to homeless in other professions, I would have waited. Students, Plumbers(there is no business due to water shortage), Electricians and  lawyers without cases would be glad to get some expensive land. Don’t we all serve the society in some way? 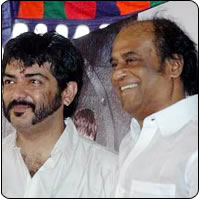 Do this poor people need Tax Exemption from us?

Do these poor people need Tax Exemption from us?

Well it does not surprise that Film Industry got the special gift as TN CM is also a writer in the Film Industry. Too bad he was not a software Engineer, else all Software Engineers would have also got free homes. The party was not a small party at your friend’s home, when his parents went out-of-station. It was an all out party where Amitabh, Kamal and Rajini shamelessly eulogized the TN CM. Prabhu Deva did the dancing, so did a bevy of Film actresses. And it is said to be relayed in Tamil Channels with much advertising. This is only part of the news. Tamil Film actor Ajith spoke boldly in the celebration that actors were being forcibly invited to functions/events in the name of sudden Tamil causes. Well his angst is totally understandable. He was invited to watch someone else’s birthday party. And he did not get any free home, as has a home of his own. Ajith’s speech was appreciated by a few, notably amongst them Film Actor Rajini Kanth.

Rajini Kanth knows the pain because he was forced to talk about Kaveri water dispute, Srilankan Tamil issue and other minor local street issues(ok, I made the last one up!). Rajini is usually a quiet person who stays away from politics. He even tried to escape abroad when there was a major pressure on him to speak out against the atrocities in old TN CM Jayalitha regime. Unfortunately he was stopped in the Airport by a Sadhu and advised to save the people. He skipped the flight and came back to save the world, err Tamil people. He openly supported DMK and TMC and helped defeat ADMK in 1996. He made a movie about the episode later, called ‘Baba’. TN CM Karunanidhi defended the celebration party saying it was a thankful gesture for all his service to the Film industry. Earlier the TN CM  had withdrawn Entertainment tax for movies made with Tamil names.

Overall the issue raises some important questions. One, How can the CM  gift tax payer’s money freely to someone else? Agreed that the Tamil film Industry is a fragile niche industry, which faces marketing onslaught from English and Hindi movies. The plight of the film workers is not bright since they don’t have medical insurance or retirement benefit or continuous work.  Ideally, every such worker in all industries should have the right to an own home before retirement. But the Tamil Movie makers are like American car companies, they don’t seem to stop making huge gas-guzzling dinosaurs for 30 years waiting to be eaten by the better made efficient Japanese cars. They have been making costly masalas with 5 songs, 3 fights with some overpaid actor and the same story for 30 years. Do movies like those of the Rajini, Vijayakanth, Vijay and Ajith really require tax payers support. A rough estimate states that the top actors draw more than 50% of the cost in salary and distribution rights. Do any of this people look like poor people. Why don’t they reduce their salaries to support their poor co-workers rather than asking for Tax payers money. Shouldn’t they structure the industry efficiently themselves before seeking Tax Payer’s money.  Also shouldn’t Film investors be responsible for the their financial decisions and the risk taken just like other businesses.

The second question is, why don’t you have your parties in your own home. Do we post our home videos of our kid’s birthday parties in Youtube. if you have to record your celebrations why don’t you post it in Youtube with password so that your fans can watch it privately! I understand that politics is a thankless job and an occasional appreciation can do the morale some good. But don’t you think the eras of Kings and open eulogies are over. At least this need not be done under public glare.

Third question is to the Tamil people, why do you expect Filmstars to come on stage and support your cause. Ajith does have a point. They are paid to do a job. They chose acting because of their personal aspiration just like we want to become a lawyer or doctor or businessman. If they wanted to be social leaders they would have become one. Aren’t there enough social leaders to take up social causes. Aren’t they entitled to their own opinions? You can choose to support a cause of your liking, while they can support a cause of their liking. If you are so concerned that they are not loyal to your cause, watch another Tamil movie. I swear you would not have missed much!

Fourth question again to the TN people: Don’t you ever get tired of making political heroes out of your Film stars? As old Tamil actor MR Radha spoke about his profession, “We are  just entertainers. We will dance and sing if you pay us. We are not better people than you are. Stop coming behind us!”. If Clint Eastwood movies were dubbed in Tamil, he would be voted chief minister in Tamil Nadu. After all he is the original guru of style..

Overall it is disgusting to see men with inflated egos fighting for their importance. Well, I am not talking about Shahrukh Khan and Bal Thackeray. But you are open to draw any similarities. And the Tamil film industry better know that there is no such thing as a free lunch!