Srilanka is an island where the two distinct nationalities exist, Tamils in the north and east, the original inhibitants of the Island and the Sinhalese in the west and south the migrants from Orissa India.

Tamils and Sinhalese were at war for many centuries to control or expand their traditional homeland. This must be the oldest ethnic conflict in the world history which remains unresolved. There was a battle between Tamil king Ellara and Sinhalese king Duttagamini in the year 145 BC. The pre colonial wars between the Tamil and Sinhalese kingdoms are well recorded in the history. Those were the times when no international rules on war, human rights and universal justice were evolved and the defeated party became slaves and prisoners of wars.

Only in the last century the Europeans unified the country and left the island after handing over the Sovereignty of Tamils in the hands of majority Sinhalese in 1948. That was the time when the United Nations was established, but the charters on the Sovereignty and rights of nationalities in different geographical regions were not yet fully explored in the process of establishing a new world order after the second world war.

Immediately after obtaining independence from the British, the Sinhalese took advantage of majoritarian authority in the parliamentary democracy and resorted to discrimination of Tamils. Through systematic colonization by the Sinhalese in the east, the Tamils became minorities in their own homeland. The Sinhalese politicians were free to enforce their own constitutional amendments later, to change to Executive Presidential system of Election and Governance only to restrict the voice of Tamils in the Parliament. 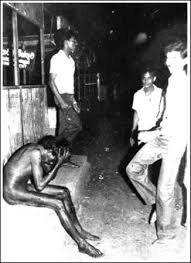 In the later part of the last century the Sinhalese  began to claim the whole island as belonging to them against which the Tamils engaged with a peaceful struggle to reclaim their rights. But the armed struggle of Tamils intensified after the massacre of thousands of Tamils by Sinhalese thugs in a Sinhalese state sponsored riot in 1983. The culprits of that state sponsored terrorism of 1983 are not yet punished.

At present, the armed struggle of Tamils for freedom has suffered a set back at the hands of a brutal Sinhalese army due to the genocidal war with no rules and witness. The Tamils have silenced their guns temporarily only to avoid further calamities.

This war has claimed more than 70000 lives – mostly Tamils and has scattered lakhs of Tamil population as refugees to India and distant lands. In the final assault of the Sri Lankan army 20,000 innocent people were massacred in a single day in 2009. At present about 300,000 Tamils are restricted in concentration camps in Sri Lanka still facing the excesses of military including sexual abuse on women and children.

This is the worst humanitarian tragedy of the new millennia which the world has turned a blind eye due to the planned blocking of access to the international agencies and media into the area of conflict. Even after the unilateral declaration of the end of war by the winning party, the whole of Srilanka is under undeclared military rule with no press freedom and freedom of movement. The extra judicial killings, abductions and atrocities on woman and children continue under the authoritarian rule of Mr.Rajapakse and his family . But slowly the world is seeing through inhuman and uncivilized activities of the state of Sri Lanka and is taking steps to bring this rogue state in to the ambit of agreed rules and conventions of international order to reestablish civilization in Srilanka.

Injured people in the Srilankan Genocide 2009

Under these circumstances, Srilanka goes to Presidential election on January 26, 2010. The incumbent President Mr. Mahinda Rajapakse is fighting against his erstwhile friend and former army chief Mr.Sarath Fonseka. Both are asking for votes not for any progressive action they have performed. Each one of the candidates claims the sole responsibility for defeating LTTE, the minority Tamil rebels who fought a war of freedom against the undemocratic rule of majority Sinhalese. It is the division of the victors, among the Sinhalese in the so called war on terrorism and not the devolution of powers to Tamils that dominates this election. Therefore the election has no meaning to the Sri Lankan Tamils.

Both candidates wish to show that they have killed the LTTE leader Velupillai Prabakaran who was running a rebel Tamil government in the north and east of the island. Mr Prabakaran was dominating the war until the active interference of India and China favoring the Lankan army in a strategic competition to control the sea routes in Indian Ocean to protect their economic interests and investments.

Mr Rajapakse and Mr.Sarath Fonseka both share common ideas against the nationhood of Tamils. Both consider Sri Lanka as one nation enforcing a Sinhalese only policy, and are involved in a concerted propaganda of lies, whereas history has recorded two nations in one island.

In his first address to Parliament in 2005, Mr Rajapakse unequivocally mentioned :

“Instead of traditional homelands and self-determination that allow an ethnic group to breakaway from the Republic of Sri Lanka, steps will be taken to ensure for all communities, including Sinhala, Tamil, Muslim Burgher and Malay the freedom to exercise all the rights enshrined in the constitution, including the right to live in any part of Sri Lanka on the grounds that the entire territory is the homeland of all communities.”

Mr.Sarath Fonseka has expressed the same theory in his own words:

Such denial of nationhood of Tamils shows that the Tamils have to carry forward their struggle against any one of these Sinhalese supremacists and racists who is set to win in the current election. In the immediate future it is not possible for the Tamils in Srilanka to intensify the struggle. Given the trend of history and the initiatives of world Tamils to support Ealem Tamils, the war will continue towards favorable conditions until achieving a seperate state for Tamils.

The struggle for self determination or autonomy for regaining equality for Tamils within this island may not be taken seriously by the international community. But Tamils can very well expect this world to protect their right to live, basic human rights and justice which is existing or granted to any other race. Tamils should be hopeful that the civilized world shall extend the courtesy it has shown in similar conflicts in any other part of the world. In this direction the world has already waken up to expose , undertake trial and award punishment for the war crimes and genocide.

It is well known that both Rajapakse and Sarath Fonseka were very much united in committing war crimes although they are now fight against each other for gaining political power. Now, Rajapakse regime has been alleged of committing war crimes by not any outsiders but by Mr. Fonseka himself who executed the commands of Rajapakse. Fonseka alleged that the defence secretary Gotabhaya Rajapaksa, brother of the President Mahinda Rajapakse had ordered the killing of Tamil Tiger leaders when they were trying to surrender in the last phase of the civil war in 2009. This uncivilized act deserves to be examined by the International court of Justice.

A vedio footage filmed during the final stages of war has also provided an evidence against the Sri Lankan army and the Government. The video showed Sri Lankan army men executing unarmed prisoners of war brutally at close range. The UN inquiry into the video’s authenticity revealed that the vedio was not fabricated. UN human rights investigator Philip Alston declared that three independent experts confirmed it was authentic.

In a major development in this month, the Irish Forum for Peace in Srilanka ( IFPS) has consulted the Permanent People’s Tribunal based in Milan and has established a People’s Tribunal on Srilanka for investigations the war crimes committed by the state of Srilanka. This tribunal will follow the methodology of Bertrand Russell Tribunal on Vietnam. The tribunal of international opinion is independent of state authorities or United Nations. It consists of 11 international judges and five interpreters including VR Krishna Aiyar and Aruntati Rai from India.

“By April 2009 according to UN internal documents air raids and use of heavy weopons were resulting in the death of 116 people a day. During the last weeks of the war according to the reports in British and French Press over 20000 people were killed when the Srilankan armed forces used heavy artillery fire against hundreds and thousands of Tamils crowded in an extremely small area. According to human rights watch hospitals were bombed 30 times between 8th December 2008 to 2nd May 2009. According to French Medical team cluster munitions and white phosphorous has been used against these civilians. There has been media evidence of torture, summary executions, rape and sexual violence and of food and water being used as weapon of war against civilians by Srilankan Military”

The next step shall be the establishment of Special courts by United Nations in Srilanka itself for prosecuting those responsible for the atrocities perpetrated on the people in the east of Sri Lanka just like the line of action taken in Sierra Leone . If the Government of Sri Lanka turns down such proposal, alternately International Tribunals will be set up as was done in Yugoslavia and Rwanda outside Sri Lanka. After indictment of the culprits arrest warrants shall be issued through Interpol. It may take many years but both Rajapakse and Fonseka will have to answer to this world for a crime which no one would dare to defend.

A ruler inaccessible, un probing and unjust
Will sink and be ruined

Death of a Salesman - Jyoti Basu