Sri Lanka has once again come under international pressure to submit to a war crimes investigation in the wake of United Nations authenticating the video showing the brutal murder of prisoners by the Sri Lankan troops last year. Earlier, mid – December, the British daily The Times confirmed the video authentic, after an analysis by Grant Fredericks, an independent forensic video specialist who is also an instructor at the FBI National Academy. The issue is now a hot topic’ within Sri Lanka, with the opposition common candidate, General (Retd) Sarath Fonseka charging the government openly, of ordering the killing of surrendering top LTTE leaders. The pressure on the Sri Lankan government is on two fronts – international and national.

The response of the ruling regime in Sri Lanka on both fronts is unabashedly confrontational denying out-and-out that no such crimes were committed. More to it, the Sri Lankan government seems to have been successful to a considerable extent in turning the table in the home front, charging the former general as a traitor. To phrase it differently, the ruling party is on the offensive by setting the terms of debate – who won the war, the President or the General – claiming that it was the President.

On the international front too, the Sri Lankan government has made clear to the UN and the powers pushing it, that it has no intention of submitting itself for any kind of intervention. And here again, the response of the Sri Lankan government has been one of outright belligerence and arrogance. The Sri Lankan human rights minister Mahinda Samarasinghe, in response to the UN human rights envoy Philip Altson, who confirmed the authenticity of the video footage on Thursday, has charged back stating that, “Philip Atson is on a crusade of his own to force an international (war crimes) inquiry against Sri Lanka.” 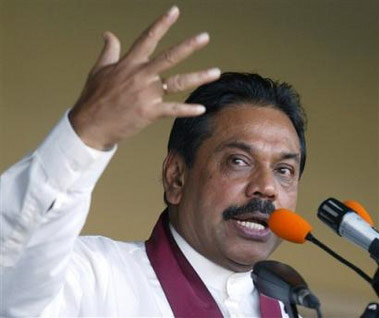 The same belligerent response came from Sri Lanka’s foreign minister Rohitha Bogollagama, three weeks back, when Mr. Altson raised the issue of war crime investigations. The minister charged the UN official of meddling with the internal affairs of the country, pointing out to the “deliberate timing to coincide with the current sensitive phase of national elections”.

The sad thing about these whole series of charges and counter charges on both fronts is that all the parties involved have pushed issue of the rehabilitation of the languishing Tamils who are still herded in despicable conditions within the inhuman internment camps in the North. The whole issue is in oblivion. The UN and most of the ‘international actors’ it seems, are in tacit agreement with the Sri Lankan government that it is a ‘settled’ issue. All parties have taken for granted that the inhuman treatment and torture of those in internment camps are a fact of life and the sufferers have to endure if they have to survive as bare humans.

It is in such circumstances that initiatives by independent groups out of the pale of the mainstream assume significance for their un-daunting efforts to bring the culprits of crime to justice. The recent announcement of the “Irish Forum for Peace” on Sri Lanka to hold a People’s Tribunal on the war in Sri Lanka in Dublin in January 2010, to investigate the war crimes of the Sri Lankan government during the final phase of the war, assumes extreme significance in the background of the failure of the tainted ‘angels’ of peace.

It is worth mentioning here that the “Permanent People’s Tribunal” that is to conduct the investigations on Sri Lanka, was instrumental in examining the cases of Tibet, Western Sahara, Argentina, Eritrea, the Philippines, El Salvador, Afghanistan, East Timor, Zaire, Guatemala, the Armenian Genocide, the intervention of the United States in Nicaragua, the Brazilian Amazon, and many other countries.

Tirupati Venkateswara compelled to sell a Laddu prasad at Rs.10