Tirupati Venkateswara compelled to sell a Laddu prasad at Rs.10

From January first the Laddu prasad is distributed to the devotees at a price of Rs.10 per piece in Lord Venkateswara temple at Tirupati, Andhra pradesh. The devotees can now buy two Laddus at a rate of Rs. 10 instead of the earlier scheme of general darshan pilgrims getting one laddu free and another for just Rs. 5.

This decision taken by the TTD Tirumala-Tirupati Devasthanam without consulting Lord Venkateswara has been resented by devotees. Particularly people of Andra pradesh consider this as not a good sign following the recent developments of death of their Chief minister in helicopter crash, Telengana protests, exit of their Governor ND Tiwari in sex scandal, a stalemate in the economic and progressive activities in Hyderabad.

Tirupati temple attracts millions of Hindus from all over the world. People believe that there will be a turning point in their life if they go to Tirupati and many others undertake thanks giving trip to this temple. People from all walks of life visit this temple and offer whatever they can in the form of money, jewellary etc as donation. Many rich men are said to visit this temple to donate a part of their black money to wash away their sin and clear their conscience.

People come here with prayer to offer their hair to god for the fortunes they desire or for the goodness they already received. Everyday thousands of devotees shave their head in Tirupati. The clean shaven head of Devotee is specially called as Tirupati mottai in Tamil Nadu. This hair harvest also brings good revenue to the temple. The hair is exported to foreign countries earning foreign exchange beneficial for the country.

Since this temple was patronized by many rulers of pre British period, lots of wealth has accumulated for many centuries. The jewellery alone is said to be worth of Rs.50,000 crore. This temple is considered the richest Hindu temple in the world.

Laddu made of besan, sugar, oil, cardamom and dry fruits

One of the most attractive part of visit to Tirupathi is Laddu which is a offered as prasad to the devotees. Legend says that this delicious sweet is loved by Lord Venkateswara. And therefore when a devotee gets a Laddu he/she considers the prasad not just as a sweet but an invaluable gift coming with the blessings of Lord.

It is a common sight we can see a person in an office distributing Tirupati Laddu to all the staff or a villager distributing this Laddu to his neighbors and relatives in return after a pilgrimage to Tirupati. It satisfies both the giver and taker. An unique feeling is attached to this sweet with a longer shelf life unlike kozhukkattai of Lord Gannesh which is home specific /one day affair.

But due to limited availability of laddus in temple, those who return from Tiruppati buy fake Tiruppati laddus in black market for distributing to more number of people taking advantage that most of the people who taste these fake laddus cannot find out which is original.

Laddus prepared with a secret receipe

TTD applied for and obtained ‘Geographical Indication Status’ for Tiruppati Laddus as if the recipe is a top secret to invite intellectual property right. Accocrding toTTD the GI Status should prevent the fake laddu makers from preparing and marketing in the name of Tiruppati Laddu. Therefore it was expected the GI Status should have blocked the black market and TTD should have sold more Laddus at Rs.5 upto 2009.

But now TTD say they have to sell these Laddus at enhanced price of Rs.10, again to prevent black marketing. This argument is strange particularly since this is the richest temple and should have enough resources to offer free laddus to any number of devotees per day. They claim that TTD incur losses to a tune of Rs.40 crore a year (contrary to the information in Wikipedia). But we have to ask why they calculate a balance sheet for Laddu only? Can they not compensate the loss due to subsidised or free laddu by adjusting with the income they earn from the hair offered by Devotee? It should be simply give and take policy. Lord shall be happy to say ” Give your Hair take my Laddu”

People suggest that if the irregularities are removed the fianances can be managed well. Recently there were allegations of gold coins and dollors missing with the nexus of priests and other officials. There was a case of misappropriation of jewellery.We can recall how Mr. Kattu Venkata Ramana Dikshitulu, one of the priests of TTD admitted mortgaging temple jewels for Rs.8 lakh. He was even defending himself that

I did nothing wrong. I did only what Lord Rama me to do. He (Lord Rama) is with me. I would not have done (it) without His help. I did what He said.

If such irregularities are prevented, and a part of income through cash, jewels and hair is diverted for preparing Laddus it is possible to offer two free Laddus to each devotee. Alternately TTD may open a chain of Laddu shops in major cities to sell GI mark Tirupati laddus at a rate of Rs.20 and divert the profit to offer free Laddus to poor devotees for whom even 10 rupees is dearer. While TTD can run a corporate temple to offer quality services it should not forget ultimately the welfare and satisfaction of the devotees are the most important they should look for and take care.TTD should not forget the story of Krishna and Kusela and should avoid the sin of sending back poor devotees empty handed after a darshan of Lord.

Now it is open for political parties to include a free laddu scheme in their poll manifesto. There is ample scope for BJP to get some political gain by raising this issue and conduct demonstration with shaven head. 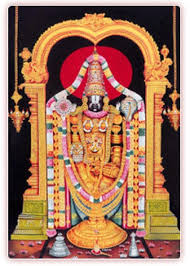 Note from the author: “I have no intention to wound the feelings of Lord or his true devotees.
In fact I consider Laddu as a symbol of nucleus of atoms wherein protons and neutrons are packed and was wondering how this Hindu religion is so scientific from ancient times.
By writing this I did nothing wrong. I did only what Lord made me to do. He is with me. I would not have written without His help. I wrote what He said.”