Home | World |  Can India try to break up China?

Can India try to break up China?

An article appeared in www.iiss.cn in the name of  XinLang Bo ke, suggesting certain strategic steps to break India. This article was in Chinese language and therefore was translated and commented upon by Indian media. The very fact that such an article has been allowed to be published in a website by China where no freedom for expression is available, reflects the real intention of China and such intentions must be well known to the Indian strategists.

If India today relies on any thing for unity, it is the Hindu religion. The partition of the country was based on religion. Stating that today nation states are the main current in the world, it has said that India could only be termed now as a ‘Hindu religious state’. Adding that Hinduism is a decadent religion as it allows caste exploitation and is unhelpful to the country’s modernisation, it described the Indian government as one in a dilemma with regard to eradication of the caste system as it realises that the process to do away with castes may shake the foundation of the consciousness of the Indian nation.

China in its own interest and the progress of Asia, should join forces with different nationalities like the Assamese, Tamils, and Kashmiris and support the latter in establishing independent nation-States of their own, out of India. In particular, the ULFA (United Liberation Front of Asom) in Assam, a territory neighboring China, can be helped by China so that Assam realises its national independence.

To split India, China can bring into its fold countries like Pakistan, Nepal and Bhutan, support Ulfa in attaining its goal for Assam’s independence, back aspirations of Indian nationalities like Tamils and Nagas, encourage Bangladesh to give a push to the independence of West Bengal and lastly recover the 90,000 sq km territory in southern Tibet. 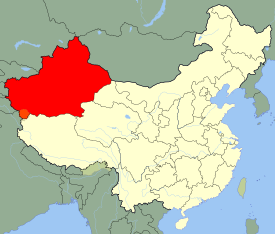 The contents of that article are totally against the existence of India . At the same time it appears to be a deliberate attempt to divert attention of the Chinese population from the disturbing internal affairs in the states of Xinjiang and Tibet. On the other hand the ruling communist party of China may be concerned about the growing economic and military power of India with a positive forecast on the Indian economy and the recent launching of nuclear submarine in the Indian Navy ; But such concerns are unfounded since at present China is well ahead of India in both economic and military status.

China have reasons to celebrate after gaining success of Maoists in Nepal, getting closer to Rajapakse Government in Sri Lanka and enjoying a solidarity with military junta in Myanmar. In this context the Indian strategy on foreign relations with neighboring countries has completely failed.

China may be delighted by the activities of Maosts in India who mostly come from the depressed classes and tribals. Only the upper caste dominated Indian strategists consider Maoists as enemy and go for a violent solution to fight with them as if they are the representatives of China forgetting that they are the citizens of India.

In reality it is purely an internal affair of few states in India even though there can be evidences that Chinese are encouraging Maoists from across the Border. This can be solved by mobilising resource for spending towards the progress of people in the Maoist controlled areas.  Alternately the locals should be given more share out of the natural resources of the concenred region. 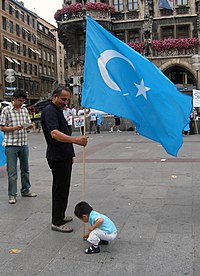 This flag is used by Uyghurs as a symbol of the East Turkestan independence movement. The Government of the Peoples Republic of China prohibits using the flag in the country.

This flag is used by Uyghurs as a symbol of the East Turkestan independence movement. The Government of the People’s Republic of China prohibits using the flag in the country.

If China sees a truth in identifying caste system as a tool to defeat India , it fails to recognize the rise of Indian Union by sharing of geographical and human resources among the States mostly divided by Languages and not by castes.

The reference to Tamils as potential nationality to which China should align fails inherently since Chinese have already aligned with the Sinhalese nationalistc Rajapakse regime, which is largey seen by the Tamils as a gonocidal regime. China also supports the military Junta of Myanmar where Tamils in millions are converted to Burmese language and culture.

The Chinese have got a wrong impression about Tamils. The valiant struggle of Tamils in Sri Lanka for the past few decades and the recent outburst in Malaysia should have made the Chinese to come to a conclusion that Tamils can be easily espoused for a vociferous demand on their linguistic and religious rights.

During Tibet’s history, it has been an independent country. Today, Tibet is administered by the People’s Republic of China (PRC).

Previously some of the foreign hands with an ill intention to slow down Indian economy, were successful in cultivating separatism in Punjab which was progressing ahead of the rest of the states in agriculture and other fields.

By the same failed logic they believe that Tamil Nadu which is progressing to become number one state in India can be targeted to destabilise Indian economy. Moreover China is always envious about the success of India in Software field which is now a catalyst to the progressing Indian Economy. It should be noted that Tamils are seen in software field all over the globe. This is the reason behind a conspiracy being laid by China to alienate Tamils from mainstream India.

The Tamils in Tamil Nadu India, demonstrated their affinity to their language in Anti Hindi agitation in 1960s but their protest came to an end once they got an assurance about continuation of English as a link language. Now the Tamils have come a long way and constitute inseparable patriotic entity of Indian Union. At this time all other nationalities in India are reaping the benefit of retaining English as a link language and are appreciating Tamils about their forethought.

If our think tank in the external affairs do not feel disturbed and if they restrain from taking legal action for writing something against the so called cordial and friendly relation with China we can also advice our Indian strategists to follow a similar roadmap as below.

1. Have a game plan and strategy to break China

3. Weaken the pro China countries like Pakistan , Myanmar and Srilanka by promoting separatism in those countries

4. Plan for closer alliance with western countries so that they come to assist India to Indian Navy in the Indian ocean.

5. By planning the coastal security with allies, the land and air capabilities should be enhanced well so that when China attacks, India can reclaim its lost territories

6. Recognise fully the Government of Tibet in exile. Promote liberation of Tibet

7. Promote liberation of Uyghur Muslims in alliance with the central asian countries which are sympathetic to freedom of the oil rich state of Xinjiang.

8. Ask Russia , Vietnam and Japan to pressurize China in whatever aspect possible to encircle China in case of dispute with India.

But we will not insist such ideas as this will make no difference between authoritarian China and Democratic India.

Instead India should go for Promoting Democracy and Human rights in China by joining hands with the liberal people of China and Tibet.

So far India is seen compromising on the Human rights, Freedom of Expression and rights of minorities just for the sake of ill conceived regional cooperation and for short term economic gains in commerce and trade and reconstruction activities. No amount of compromise is enough to satisfy countries like SriLanka, Pakistan and Myanmar. Such compromises are going to result in losses.

But without preparing a home ground, India cannot play a peaceful game in this region. The Non Governmental organisations in India must be allowed and encouraged to conduct peaceful demonstrations, campaigns for the cultural and religious rights of Buddhist Tibetians, for the right to autonomy of Xinjiang Muslims, for the restoration of democracy and release of Ms Aung San Suu Kyi in Myanmar, for establishing a homeland for Tamils in Sri Lanka, for the rights of Malaysian Hindus and for freedom of expression in South Asia especially in Sri Lanka and Myanmar.

This is the proven way, just like India has already made a non violent cultural aggression through the spread of Buddhism in Asian countries including China, we can also make this successful invasion through Democracy and Human rights. Best wishes India!

If China dreams about an India free from caste conflicts, it can send back Buddhism to India.

What about Indian defense and Security? That is well advised by a Tamil saint long time back.

Dadagiri - "How can she slap?"