Will Obama talk to Osama?

Last year while Barack Hussein Obama was still debating with Hillary Rodham Clinton on the nomination platform for the Presidency of the United States of America, I started penning a poetry collection in which, I engaged in an imaginary conversation with god and asked, what he was doing at that time.

You may be scripting a

dialogue between Obama and Osama

or a message of non violence

to be delivered from the tongue of Dalai Lama…

Today, part Of my wishful thinking has become a reality. Mr. Barack Obama has been elected as the President of the USA. Rest appears to be in the making. After a month of assuming office in the White House, Mr. Obama has hinted at talks with moderate elements of Taleban, pursuant to his commitment during the election campaign for focus on Afghanistan. 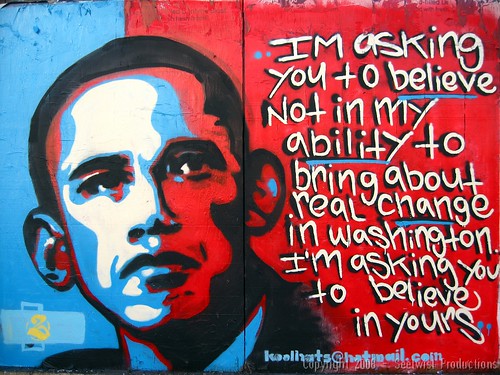 A graffiti art of Mr Obama with his words.

Although it is premature to speculate reconciliation with Mullah Mohammed Omar – the leader of Taleban, this initiative by Mr. Obama shows some signs hitherto considered impossible. This can be a step to break the stalemate in the conflict resolution. This indeed is a change.

What made Mr. Obama, float such an idea? Mr. Obama has said part of the success in Iraq involved reaching out to people who were considered Islamic fundamentalists but were willing to work with us, because they had been completely alienated by the tactics of Al-Qaeda in Iraq. Mr. Obama has further added that there might be some comparable opportunities in Afghanistan and Pakistan.

Therefore by Mr. Obama’s own words – the Islamic fundamentalists are not beyond reach to work with. Moreover, Mr. Obama’s enthusiasm springs from his instinct of openness to evolve a comprehensive strategy of not ruling out dialogue, to set achievable goals, by admitting the mistakes committed in the past – to present a hope for the future.

But as we know, any radical change in politics will be opposed vehemently by forces for “Status Quo” and welcomed by forces who seek change. Presumably, there are mixed reactions for the change in policy on Afghanistan.

For Afghan President Hamid Karzai, it is good news, as he says “We are in favor of talks with those Taleban, who are not with Al-Qaida network and are not playing at the hands of foreigners to destroy the country and in this regard we back the stance of U.S. President”

Pakistani cricketer turned politician Mr. Imran Khan urges US to talk with Taleban citing that Afghanistan has a less governed region and a history of fierce independence among tribes.

An article published in Washington Post titled – “Obama’s call on moderate Taliban useless: Analysts’’ quoted Mr. Waheed Mozhdah – author of a book on Taliban as saying – “Obama’s comment resemble a dream more than reality”. Further Mr. Ahmad Saeedi – a former diplomat and analyst, expressed his view that the tactic would not succeed in Afghanistan where arming militias would only become another headache for Kabul and the West and Mr. Obama’s call for reaching to moderate elements was aimed at appeasing European countries increasingly disillusioned with what looks like a war without end, ahead of a planned trip there.

Pakistani analyst Mr. Rahimullah Yousufzai welcomes Obama’s proposal but is skeptical about the chances of negotiating with the Taliban quoting that the Taliban are very rigid in their demands. They actually don’t want to talk unless there is some guarantee that Western forces will leave.

These comments projected in the media smell failure of talks at the very mention of the proposed talk with Taleban, cast doubt on the good intention of Mr. Obama and point out the un-accommodative rigid nature of Taleban.

What could be the reaction of Taleban? It seems they will not rule out but apply pre condition for the talks.

Mr. Zabihullah Mujahed, the purported Taleban spokesman reiterated that Taleban’s framework is consolidated and there would be no talks unless all the international troops withdraw from Afghanistan.

While opinions are expressed in favor and against, with a change in strategy, there is a possibility that the seven year old war on terror in Afghanistan, as described by the western forces, can now be scaled down by suitably accommodating the extremists resulting in reduced civilian casualties. If civilians are indeed protected, upon his visit to Kabul, Mr. Obama shall be greeted with bouquet as opposed to shoes like his predecessor Mr. Bush in Baghdad.

Pakistan which is the closest neighbor of Afghanistan has recently demonstrated in its own territory – Swat valley, that negotiation and agreement for ceasefire with Taleban is possible which ultimately brings peace to the local population although it does not satisfy all sections of the international media and especially the western intellects.

With no other option, the US has not ruled out talks even with Hizbullah and Hamas and asked them to recognize Israel as a pre condition for talks. Wherever it may be – who to talk depends on to the answer for who the locals are emotionally attached and feel protected with.

Let me take you back in history for a moment. In 1985, Reagan and Gorbachev held their first “summit” meetings in Geneva. After discussing policy, Reagan invited Gorbachev to a small beach house. The two leaders spoke for a long time and came out with the news that they had planned two more summits (which became three more later).

That dialog happened at a time when the term “communist” was synonymous with the word “enemy” in the US. (Even today you have to state your communist party membership if any in a US visa application). However the dialog led to the end of the four decade old cold war that incurred tremendous cost – military expenditures by the US in this period is estimated to have been $8 trillion, and nearly 100,000 Americans lost their lives in Korea and Vietnam. Although the loss of life among Soviet soldiers is difficult to estimate, the financial cost for the Soviets was even higher. In addition to the loss of life by uniformed soldiers, millions died in the superpowers’ proxy wars around the globe, most notably in Southeast Asia.

Coming back to the present day, With the US administration exhibiting change it its approach towards Islamic fundamentalism, the question “Will Obama talk to Osama?” may still be viewed as premature or even immature by some analysts. Others might ask if the question should rather be “Will Osama talk to Obama ?” considering the rigid nature and ideals of Al-Qaeda.

Whatever the question might be, the answer to “Global Peace” does seem to lie in dialog – one that could possibly lead to a better understanding between people at extreme ends.

Malarthamil is a civil engineer and writer-poet inspired by Thirukkural – a classical Tamil poetry that expounds various aspects of life.