Chennai, Aug 6 () : With Thalaivaa and Chennai Express releasing on the same day August 9, we can sense some tension creeping in resulting in box office clash. Another commonalty in these pictures would be that Sathyaraj shares a role in either of these films. Both are commercial flicks with Ilayathalapathi Vijay’s Thalaivaa being a political action blockbuster while Bollywood Baadshah Shahrukh Khan’s Chennai Express is a romantic action entertainer.

Usually Vijay’s films would clash with major blockbusters against tough competitive Kollywood pictures. But this time he’s all set for a Bollywood challenge against King Khan. Sathyaraj plays a dominant role in Chennai Express while his role in Thalaivaa is said to be pivotal. 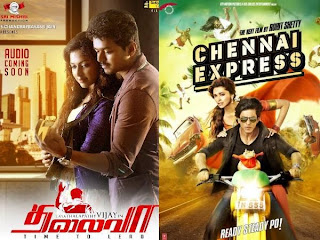 Thalaivaa stars Ilayathalapathi Vijay, Amala Paul and Sathayraj, the movie is directed by AL. Vijay as is produced by Chandra Prakash Jain. The producer recently revealed his plans of remaking this project in Bollywood where Akshay is likely to play the lead role. The title for the Hindi version is yet to be confirmed. The movie is being dubbed and released in Telugu alongside the Tamil version.

SRK came down to Chennai to an audio release and promptly made proper use of the stage to promote his movie Chennai Express down South here. Previously, there was a similar clash in 2011 where Vijay’s Velayudham and SRK’s Ra. One released on same day for Diwali.

With Thalaivaa releasing in as many as 2300 screens, it has shattered the previous record of Suriya’s Singam 2 which was released in around 2000 screens. Chennai Express takes a leap ahead and releases over 3500 worldwide. To find out who’s going to bag the box office income, we will have to wait until Eid.